My most recent pickup was the 2010 topps triple threads 1/1 Kevin Youkilis yellow printing plate. this is a base card made by the plate. 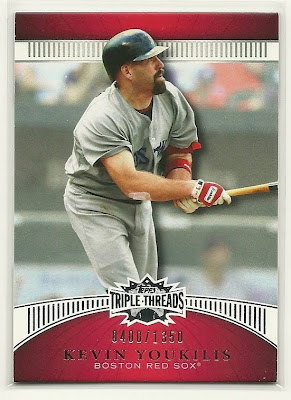 Hey, everyone. Sorry for the lack of posts lately, I've been busy. Anyways, in the world of cards, Beckett busted some not-yet-released 2010 Topps Triple Threads, which as 20youksox said was pushed back for release. Be sure to check it out on Beckett! Just a quickie today, I'll have more later on today or tomorrow.
Posted by The Pack Prodigy at 6:17 PM No comments:

Does anybody remember when they used to put puzzle pieces into packs?

How weird is it that he pulled the other half?
-20youksox
Posted by 20youksox at 3:05 PM No comments: 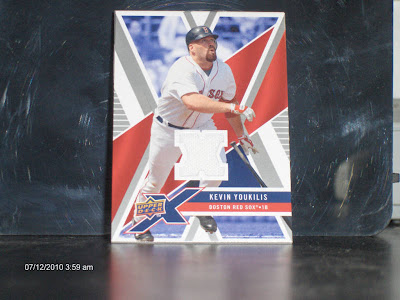 Just checked my mailbox and found this nice card from a trade! It is a 2008 Upper Deck X jersey card of Kevin Youkilis.
-20youksox
Posted by 20youksox at 3:23 PM No comments:

Upper Deck just released this photo of the nearly completed mystery cuts. This is an uncut sheet of subjects that I cannot recognize, however completion of the mystery cut project still has a ways to go before it is complete. Cuts still need to be hand numbered, cut, pass through quality control, and be packaged before they are sent out to eager customers. Consumers hope to receive the cards before Halloween, and I will post what mine is when I receive it! 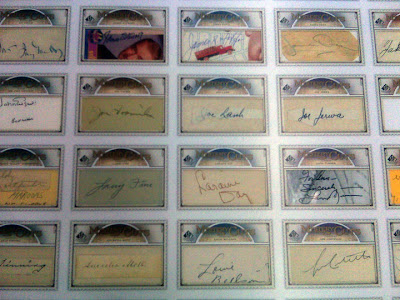 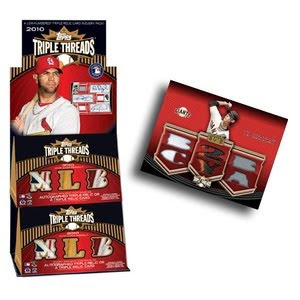 In the latest news, 2010 Topps Triple Threads' release date has been pushed back yet again and is set to hit the market on Friday. This years release will include old ideas with new ideas including odd memorabilia cads. Some book cards will include nontraditional swatches of whole relics including wristbands, necklaces, and even sunglasses? Triple Threads has two packs per box, with one containing an low numbered triple relic and the other holding a low numbered autographed triple relic. Hopefully Topps will stick with this date and the product will exceed expectation. Look forward to more information upon release.
-20youksox
Posted by 20youksox at 11:58 AM No comments: 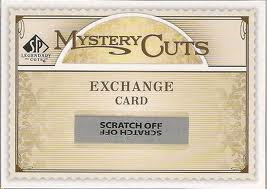 I pulled one of these mystery cut redemptions back in april, and have been anxiously awaiting its arrival. Upper Deck has kept most people quiet by sending out bonus cards which included jumbo patches, team USA letterman autos, and signature stars auto's. Unfortunately, I got stuck with a Scott Feldman auto and a Corey hart auto for my one cut, but I would have rather had a jumbo patch. However, now I am starting to get frustrated as upperdeck still has not completed project and refuses to give us an estimate of when they will be completed. Upperdeck gives the same response "They will be shipped out in one month", but they have been saying that since last October. Many people speculate that our mystery cuts were released as a part of the Prominent Cuts release, which might contribute to the delay. So I say to upperdeck, stop lying and tell us when you will be done!
20youksox
Posted by 20youksox at 9:40 PM No comments: 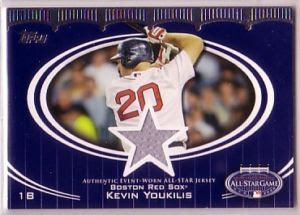 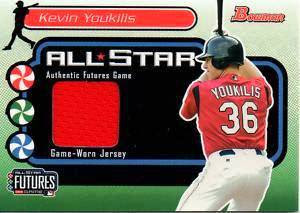 Hey ,everyone. Alright, right off of the bat, here's two more rookies call-ups who are preforming well, who have shown flashes of greatness, and just been somewhat overlooked... 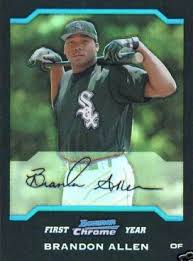 Posted by The Pack Prodigy at 7:37 PM No comments:

Hey, everyone. Sorry that I haven't been able to post lately.

Well, as you know, September brings the annual call ups, upgrading the 25-man roster to a 40-man likeness, and that also means a host of new rookie cards. 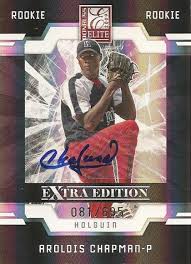 I'll do two each day for about a week, so stay tuned!
Posted by The Pack Prodigy at 7:41 PM No comments: 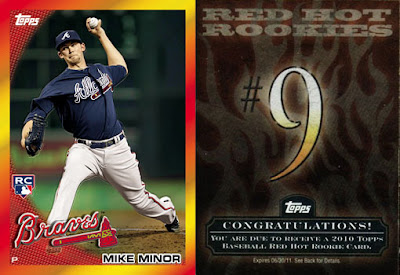 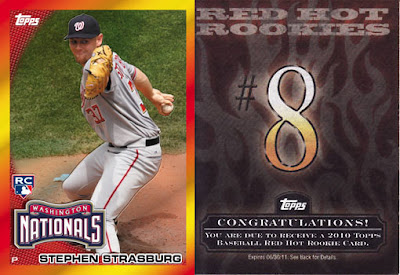 Red hot rookies number 8 and 9 were anounced today, and I am psyced because I have number 8. 8 is Strasburg, and 9 is Mike Minor!
Posted by 20youksox at 5:29 PM No comments:

The title pretty much says it all. I really like Ryan Kalish, explaining his two customs, then the Youkilis ones are for 20youksox as well as myself. I also, obviously, love Pedroia, so I was excited to make his custom. More to follow! 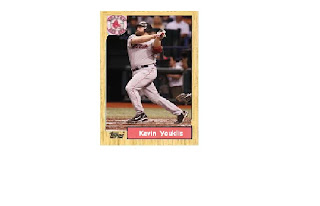 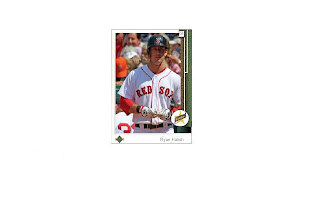 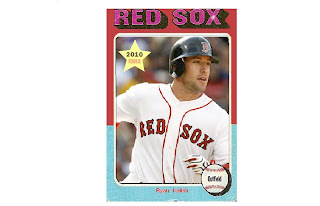 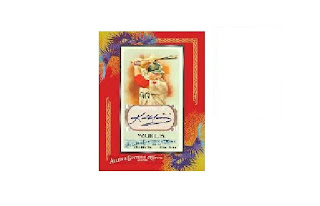 Posted by The Pack Prodigy at 7:52 PM No comments: 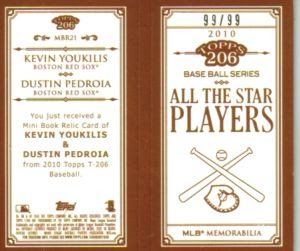 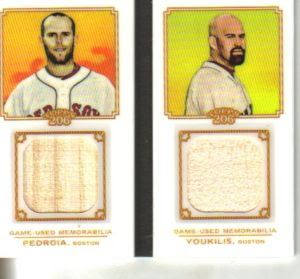 Hey, everyone. I promised that I'd have a post relaying the results of my trade with 20youksox, so here it is. Here's what I got: 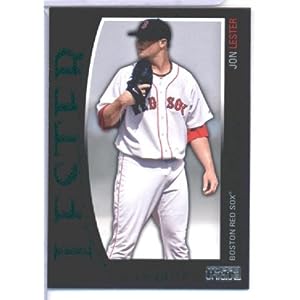 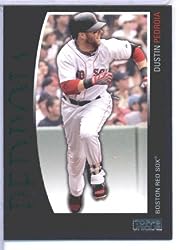 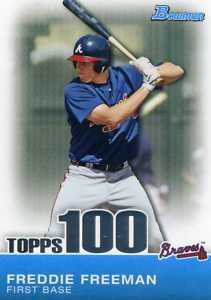 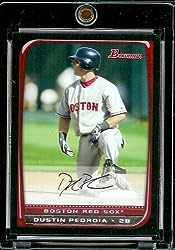 Overall, I'm pretty happy with what I managed to get.

Funny story. Today, 20youksox and I went to a flee market. One of the highlights was that one person was selling a Mark McGwire insert for $50 that we saw after at a different vendors table marked as $1. Then, I went to a booth that had surprisingly decent cards (I got a 2006 Flair Showdown Papelbon RC and a 2005 Topps Carlos Gonzalez FY), and completely out of the blue, someone offered us a completely free box of assorted baseball, football, and basketball that he had in his car trunk. Now, at first that seemed a little bit sketchy, almost pedophile-like, but you could tell by his attitude that he was serious. So, without hesitation, we took the box and ended up with a lot of free cards. Now, the downside is that, although it contained some decent cards, it also contained a lot of football dupes and junk wax. There will possibly be a contest for the other cards if anyone wants them, as well.
Keep Breakin'
-P.P.
Posted by The Pack Prodigy at 3:05 PM No comments:

Hey, guys. The Pack Prodigy here with 20youksox, and, as his name implies, 20youksox is an avid Kevin Youkilis collector. And, tonight, after several trades, he has reached a momentous milestone that I am proud to have been here with him to be a part of and oversee: his 100th Kevin Youkilis card! Now.........the moment we've all be waiting patiently for.......I think I'm going to need Bullwinkle for help on this one...
"And now, for something we hope you'll really like!". Never gets old.....
Kevin Youkilis card #100! 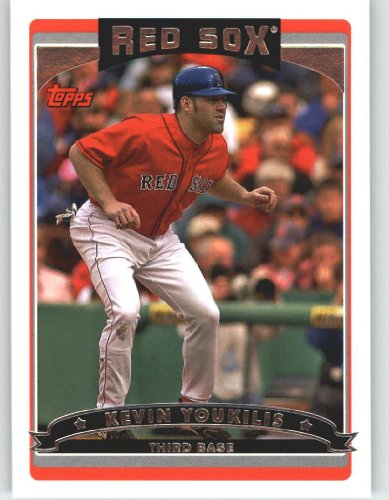 Not only that, but we also made a huge trade with benefits to 20youksox's Youk PC and my Pedroia and Lester PC, and with several others to go along!

I'll have a post on those cards tomorrow, as will 20youksox. Thanks, guys.
Keep Breakin'
-P.P.
Posted by The Pack Prodigy at 7:15 PM No comments:

Beardy, you are a Masterpiece

As I mentioned before, Beardy over at mojobeardy.wordpress.com is doing the possible impossible; creating a 2010 Upper Deck Masterpieces set. Not only has this came out as a way to prove that Upper Deck could have just as easily created a logoless set, but it is a pure genius act on the part of Beardy. He finally finished my Ryan Kalish, and I'm more than please with the result. Take a look:

Here's the base, (above)

and heres the sage parallel. (above)

Bravo Beardy, great work!
Posted by The Pack Prodigy at 10:51 AM No comments:

Hey guys. Sorry I've been short with posts lately, due to the fact that I've been very busy. But, the past week or so, 20youk and I have gone to several flea markets together and found so pretty sweet cards. I managed to get 2 Josh Hamilton rookies: 2007 Topps and 2007 Fleer Ultra Lucky 13, for $0.50 each! Then, at another flea market, I picked up a 2007 Topps Heritage Jon Lester base, along with several packs from various years, including 2010 Topps Hobby Edition. Although there weren't an extreme amount of dealers, we found some good and dedicated ones that it was none but a pleasure to do business with. Another card I got for $0.50 was 1996 Topps Vlad Guerrero/Andruw Jones/ 2 other no names prospect card pictured below:

I like this card, which is clearly a sweet band-for-my-buck pickup. It books at around $4.00.

Like 20youk said, Topps 206 recently came out, and Beckett announced that all cards featuring players wearing helmets or hats are SP's. (Sarcastically Enthusiastic: "Oh boy! Now we can look forward to finding players in 1:4 packs that don't have pine tar-ridden locks of sweaty hair on their occasionally egotistic heads!")

Oh yah, props to Beardy for taking some initiative on his 2010 Masterpieces set. He even went as far as to honor my request for a Pedroia base card! Check it out on his site.


That wraps is up for now.

Keep Breakin'
-P.P.
Posted by The Pack Prodigy at 6:00 PM No comments:

In the latest news, 2010 topps 206 baseball was releaed today and blaster boxes were released a few days ago. Hobby boxes contain 1 autograph and one relic per box "ON AVERAGE". Seeing articles on Beckett and box breaks on youtube, many people have been getting shorted hits. This product contains the beaten to death and then shot idea of using tobacco card designs with hand painted pictures, which as we've seen in Chicle, can be terrible, but the pictures I've seen in this are pretty good. Also you may have noticed that the players are not wearing hats, because cards with hats are short printed. Also topps continues to ignore consumers and used silver sticker autograph which don't look very atractive on the white cards. Many people are calling this new product allen and ginter series 2. On a lighter not, the product containg many inserts, parellels, and variations. If you are looking for a good product to put together a set, then this is the one for you, but if you are looking for a big hit, you will not find it here unless you hit a one per every 2 case mini relic book card. Most hits are generic single color jersey swatches or no name autographs. I wold rate this product a 2 of 5 because I would be in the category looking for a big hit and this product has very few Kevin Youkilis cards. Make sure to watch this insane box break of the new product, but keep in mind a box like this is one in a million before you go out and buy a case.
http://www.youtube.com/watch?v=DEMinJrXCk4