The Thrill of the Throwback: My New Mini Collection

Throwback uniforms, or pretty much any cool or unique uniforms, have always been a favorite of mine. That interest has begun to manifest itself in a subcollection of cards. I'm devoting an entire section of my binder to baseball cards that have pictures of players in throwback/awesome uniforms. So far, I only have about a front side of a page full, but I'm hoping to make some trades with 20youksox and maybe find some dime-box pickups along the way.

Also, I've been inspired by Dime Box Nick over at baseballdimebox.blogspot.com to start valuing cards (that can even be as cheap as a dime) for more than their book value: whether it be cool photography, nostalgia, or any other things that set apart these "gems" (as he calls them), I'm going to try to pick some up whenever I see a dime box. I'll even try to devote a section of my binder to dime-box pickups.

Needless to say, I'm hoping to advance my collection of cool uniform cards in the near future. You all should really check out Dime Box. It's linked on the sidebar blogroll on the right hand side of your screen. Soon, I'll have scans of how my collection is progressing.
Posted by The Pack Prodigy at 6:13 PM No comments:

A while back, I pulled a million dollar chase redemption code.  I never redemed it because I will never win anything anyways, but I got bored tonight and figured I would enter it.  Well, I got none other than Kevin Youkilis, my favorite player and my PC player.  My official prediction is that Youkilis will have a 60 game hitting streak and I will win a million dollars.  Hey, I can dream right?

Hey everyone.  I'm back, and this time it should be for good.  Like I said last time I have been super busy, but now I'm free and should be back to regular posting.  I'll start off the posts with a sick mailday I got.  As many of you know, I am trying to acquire all of the six 2011 Topps Update Kevin Youkilis All Star Jumbo patches.  I had four of them, and now I have five!

This one is numbered 5/6.  That means that the only one I am missing is 6/6.  Also, all of the patches I have so far fit together.  This one is the top of the N from AMERICAN, with a little of the top of the A.  I'll post pictures of them together tomorrow.  I really hope I can get the sixth one someday.

Found this card digging through my Misc.boxes yesterday.

Credit for the image is attributed to http://bit.ly/Zys61A (The Trading Card Database)
My scanner is sort of dysfunctional at the moment, so I used TCD's image.
Posted by The Pack Prodigy at 7:09 PM No comments:

The Story Behind the Superfractor

I had some time to post today, so I figured I would share the story behind my 2012 Topps Chrome Kevin Youkilis rainbow.  Not only is it special because it was Youk's last Red Sox rainbow, but the picture has a special meaning to me as well.  I was actually at the game that this picture was taken at.  It was the 4th of July 2011.  The Red Sox got crushed and Youk got hit by a pitch that injured him.

Even though it was a rough game, it is still cool that I was there.  Any trip to Fenway is a good trip to Fenway.  This just makes the rainbow even more special.  I have one lone package coming in this week.  Until then, I probably won't post much.

Hey everyone.  I just wanted to say that I have been really busy lately, so I haven't been able to post.  I haven't picked anything up lately anyways, but I did buy something off ebay yesterday.  I am probably not going to be able to resume regular posting for another couple weeks.  Until then, I might post a few times, but not often.

Hey, everyone. So I have a new project that I'm planning on undertaking in terms of autos and relics: Why not just pick up any reasonable Red Sox auto/relic no matter how obscure? Obviously, this will be a side project as I hope to continue focusing on my plethora of already-in-progress PC's: Red Sox/ Red Sox Star PC, Rookie PC, Pedroia PC, and Lester PC. COMC has some pretty cheap Sox relics and autos, so we'll see how it works out. I'll show you my haul at some point in the near future.
Posted by The Pack Prodigy at 10:37 AM No comments:

In a bold attempt to do what Upper Deck never could accomplish, Panini America is slated to release a set of baseball cards (sans-MLB License) on July 31, according to Beckett.com. Albeit, they do have an MLBPA license. The article (http://bit.ly/ZaXVUY) goes on to mention that two autos will be found per box, with each box containing 24 Packs. The SRP is listed $2.99/Pack. Also, a 200 Card base set with a solid set of inserts is to be included, with the base set also including 50 rookies. Preview images are also included in the article.

Furthermore, Panini's ever-popular Prizm set is set to headline a baseball card set in August. 2012 Prizm already has fared very well on the primary and secondary markets.
Posted by The Pack Prodigy at 11:36 AM No comments:

After busting a few packs of 2013 Topps Heritage, I started looking at the backs for short prints.  Even though I didn't find any short prints, I found something interesting on the back.  I noticed a huge blank spot on the bottom right next to a trivia question with no answer to be found.  That's when I saw the blurb saying to unveil the answer to the trivia question by scratching it with a nickle or dime. 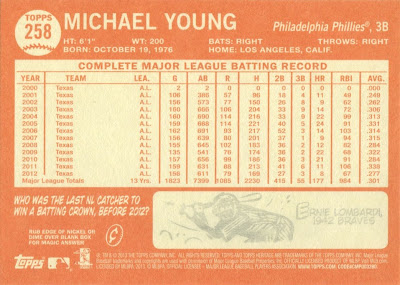 Here is an example of a card with the trivia answer scratched.  This is definately a nice touch to the set making it fun and interactive.  I wonder what would happen if you did this with a penny instead of a nickle or dime?

This also brings up questions like the famous Rip Cards.  Rip or Keep?  Scratch or Don't Scratch?  While obviously these are base cards and not worth as much as rip cards, some collectors may perfer them unscratched.  I think that it won't matter in the long run, but set collectors could have problems with receiving scratched cards when the are looking for an unscratched base set.

Personally, I don't plan on scratching the backs other than the one I already did.  It was cool to scratch one off, but it takes more effort than I care to give, and it may make them harder to trade.

For those looking to scratch, it does actually scratch the back of the card.  Because of this, cards sent in for grading may receive a low surface grade.  If you don't care about grading and don't plan on trading, go ahead and try it because it is a cool feature in this retro set.  This is something I wouldn't mind seeing this in future releases.