Last night, I ended up buying a hobby box of 2010 Bowman Draft baseball, and one hobby pack of 2010 bowman chrome. Here I what I pulled. Bowman chrome did not have anything notable. 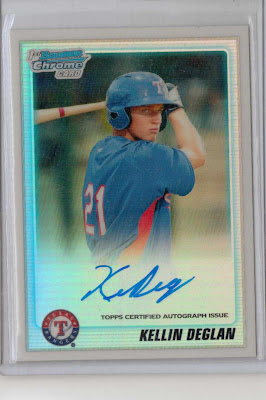 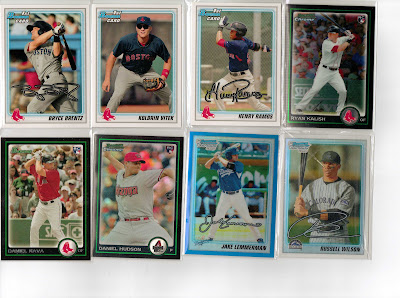 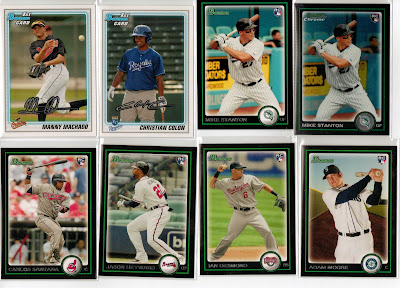 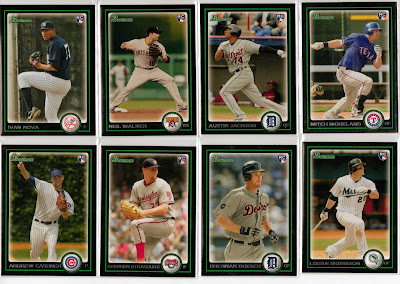 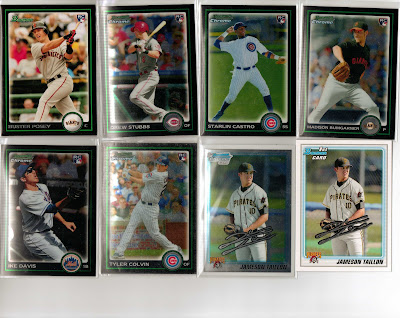 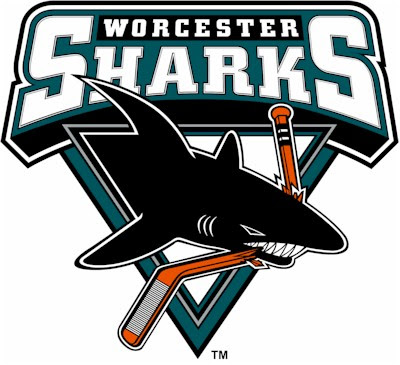 Tonight, for Christmas I will be taking the Pack Prodigy to a Worcester Sharks hockey game versus the Bridgeport Sound Tigers, but before the game we will be going to That's Entertainment to bust some wax, so we will keep you posted on what we pull or buy. I will see you later Pack Prodigy!!!
-20youksox
Posted by 20youksox at 10:57 AM No comments:

Hey guy's. I just got a scanner so I am going to try it by showing off my Kevin Youkilis PC 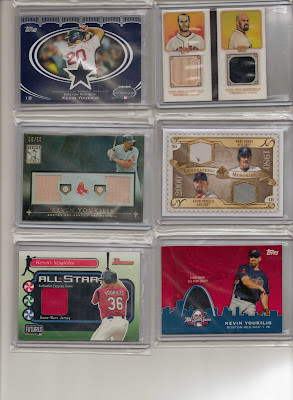 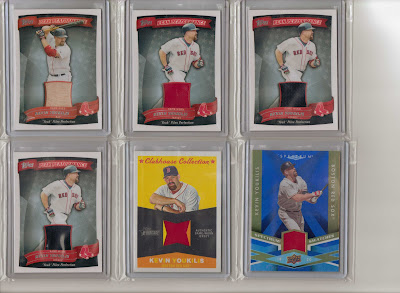 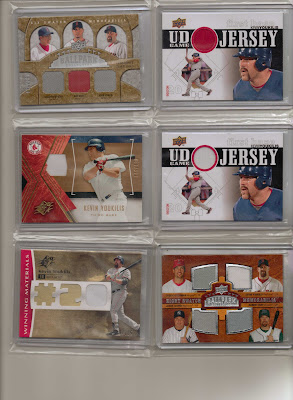 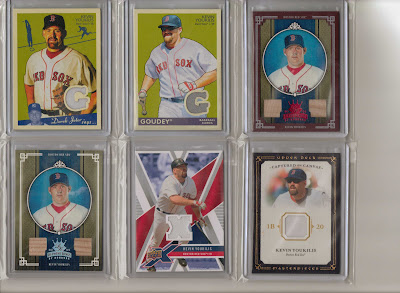 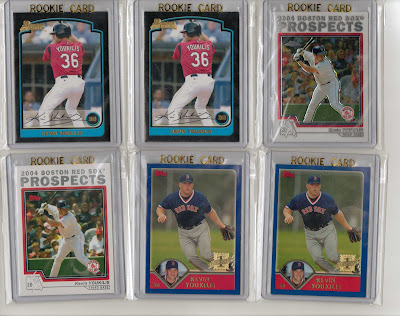 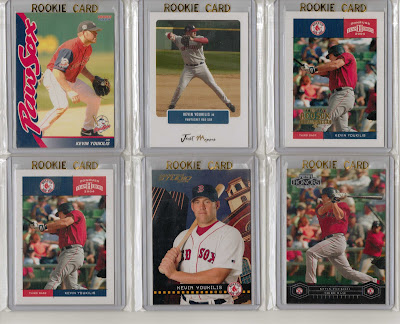 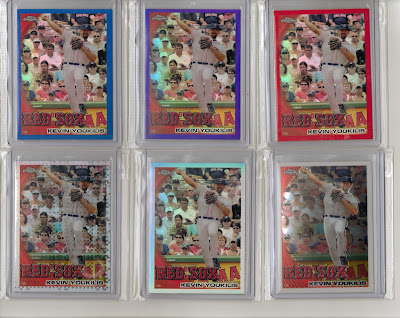 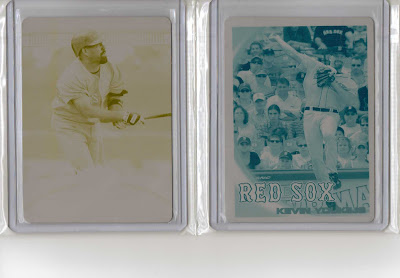 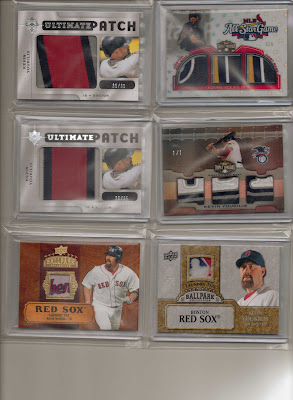 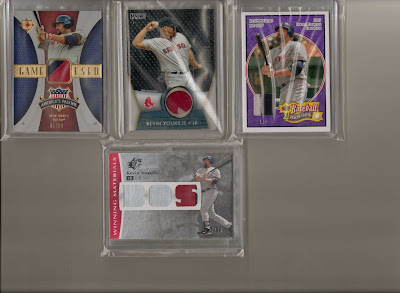 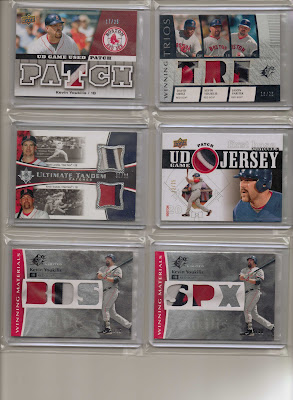 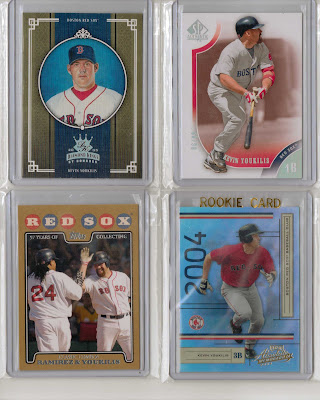 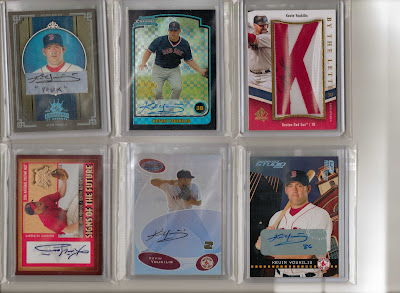 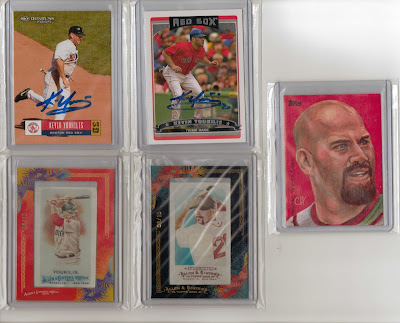 Pic of My Prized Christmas Card

Hobby Packs of 2010 Allen and Ginter:
Kevin Youkilis Base

I also received a Kevin Youkilis autographed baseball, a Kevin Youkilis authentic alternate away jersey(blue), and a scanner so I can now post pictures of the actual cards, rather than using pictures from ebay! With all of the Christmas money I received, I plan to go to the card store tommarow, so I will let you know what I get. I hope everybody had a happy and safe holiday!!!
-20youksox
Posted by 20youksox at 8:57 PM No comments:

Hey, everyone. Merry Christmas! I got tons of cards, including the hobby box of 2006 UD Future Stars I promised. Here's a rundown.

2 Retail Packs each of Bowman DPP and Chrome: A blue refractor auto /199 of someone I can't quite remember the name of who plays for the Indians farm system.

Daniel McCutchen Auto (Auto Smudged with Blue Streak on Back?)

Alex Burnett Auto (Auto Smudged with Blue Streak on Back?)

The chrome was horrible, but the Legendary Cuts was not bad! Happy Holidays!!!!!!!!!
20youksox
Posted by 20youksox at 9:56 PM No comments:

Twas the night before Cardmas, when all through the house
Not a cllector was stirring, not even Chris Olds.
The stockings were hung by the chimney with care,
In hopes that a big hit soon would be there.

The collectors were nestled all snug in their beds,
While visions of mojo hits danced in their heads.
And 20youk in his Red Sox jersey, and I in my Red Sox cap,
Had just prepared ourselves for a big box break.

When out on the lawn there arose such a clatter,
I sprang from the bed to see what was the matter.
Away to the window I flew like Carl Crawford,
Tore open the shutters and threw up the sash.

The moon on the front of my new chrome cards
Gave the lustre of a rainbow to the cards below.
When, what to my wondering eyes should appear,
But a 1/1 Press plate, and eight relics and autos here.

With an awesome big pull, so pricy and slick,
I knew in a moment it must be the mojo.
More sick than a patch card, the hits they came,
And he whistled, and shouted, and called them by name!

As hands that before the wild hurricane fly in celebration in the air,
When they meet with an obstacle, mount to the sky.
So up to the house-top the coursers they flew,
With the sleigh full of card, and of course mojo too.

And then, in a twinkling, I heard on the roof
The sound of the mojo and all of the hits.
As I drew in my head, and was turning around,
Down the chimney the mojo came with a bound.

It was slick and sweet from its head to its foot,
And its cards were all pristine without with ashes and soot.
A bundle of cards he had flung on his back,
And he looked like a collector, just opening his pack.

He spoke not a word, but went straight to its work,
And filled all the boxes with mojo, then turned with a jerk.
And laying his finger aside of its packs,
And giving a nod, up the chimney it rose!

It sprang to his sleigh, to his team gave a whistle,
And away they all flew like the down of a thistle.
But I heard it exclaim, ‘ere it drove out of sight,
"Happy Cardmas to all, and to all a good-night!
Posted by The Pack Prodigy at 7:55 PM No comments: 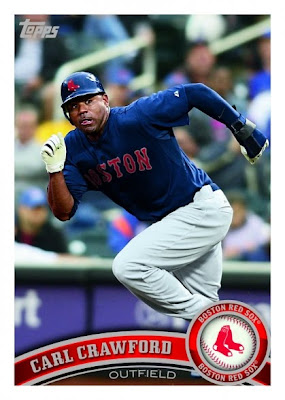 Topps just released that they will be putting cards of Carl Crawford and Adrian Gonzalez in 2011 Topps in a Red Sox uniform. These cards are short prints, so they will be harder to find, but a must have for Red Sox collectors. Also, later this week, I will have box reviews of 2010 Topps Chrome Baseball, and 2009 SP Legendary Cuts Baseball.
20youksox
Posted by 20youksox at 10:23 AM No comments:

Hey guys. I would just like to warn you about all of the fake cards on the internet. You really need to be carefull, especially around this time of year. You also need to know that there are some fakes that have been encapsulated as authentic by grading companies, however these cases are fake as well. Here is an example. 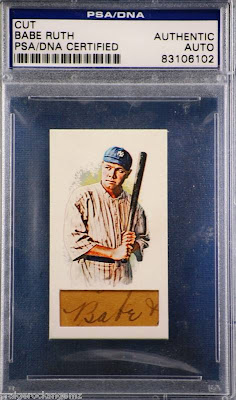 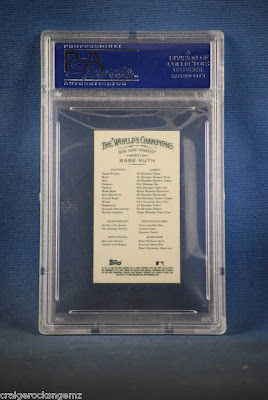 Here are some tips to spotting fakes based on the example that can apply to other cards.
1. As you can see, there is a penny sleve inside of the case.
2. The autograph window is not cut strait.
3. There is no COA on the back.
4. There is no serial number.
5. This card is not on the checklist.
5. There were no mini cut auto's in this product.
6. Half of the autograph is missing.
7. It does not look like other cut auto's in this product.
So beware and don't be tricked.
20youksox
Posted by 20youksox at 6:08 PM No comments:

Here's the monumental milestones card that I promised everyone!
Posted by The Pack Prodigy at 7:37 PM No comments:

World Series In Our Future?

After two monster off-season signings for the Red Sox, many Sox Fans (including 20youk and yours truly) feel that the upcoming season is the most promising in a long time. Here's what the new BEATS OF THE AL EAST have in store for their lineup, rotation, etc....

The Red Sox signed Carl Crawford today to a 7 year $142 millon deal. The Gonzalez trade also went through and the Red Sox shipped out Casey Kelly, Anthony Rizzo, and Rey Fuentes.
Posted by 20youksox at 5:10 PM No comments: 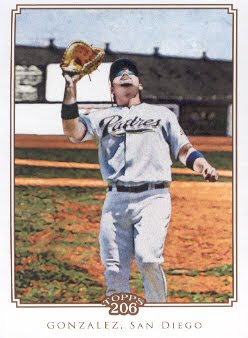 The Red Sox have almost completed the deal for Adrian Gonzalez. Althogh no majors league players will be traded, the Red Sox will likely let go of top pitching prospect Casey Kelly, and they also might include Ryan Kalish or Anthony Rizzo, but that information has not been released yet. Gonzalez just needs to pass the physical to complete the deal. With Gonzalez on the team, Kevin Youkilis will likely move back to third and we will not resign Beltre, or Kevin Youkilis could move to left feild. When the deal goes through, I think the Sox will Have a real shot at the world series!
-20youksox
Posted by 20youksox at 9:50 AM No comments:

2010 Upper Deck baseball was snubbed by manny baseball collectors this year. During a black Friday sale, they had it for sale and I couldn't resist. This is what I got...
Mariano Rivera Jersey
Matt Tolbert Jersey
Jonathan Albaladejo auto
Buster Posey rookie
Roy Halladay 4 color patch with 9 breaks 9/25 (Looks much better in person) 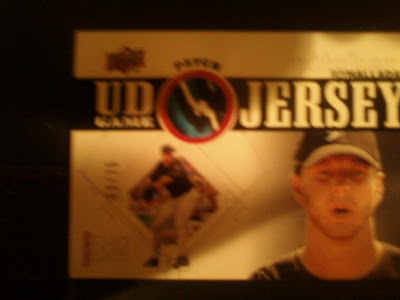